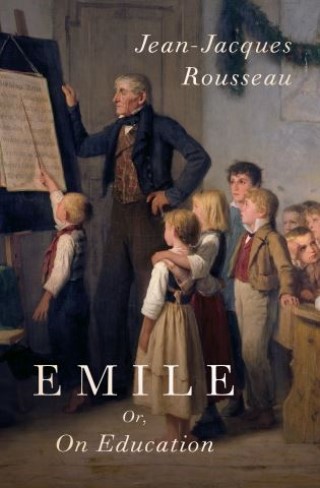 The once banned and burned treatise on the nature of education from the eighteenth-century philosopher and author of The Social Contract.

Considered by Jean-Jacques Rousseau himself to be the “best and most important” of all his writings, Émile set off a firestorm when it was first published in 1762. It was banned in Paris and burned in Geneva, but later served as the inspiration for a new national system of education during the French Revolution.

In its pages, Émile and his tutor embark on a scholarly journey through the boy’s upbringing. The book also follows the character of Sophie, commenting on the role of women in society. “More a tract upon education with the appearance of a story than it is a novel, the book describes the ideal education which prepares Émile and Sophie for their eventual marriage” (The Roots of Educational Theory).

“Jean-Jacques Rousseau’s Émile or Treatise on Education remains relevant today. The theories and beliefs of Enlightenment philosophers such as Rousseau played a big role in shaping the beliefs of the public at the time, particularly when they were able to distribute their ideas on paper. Without written documents such as this one, it would be impossible to understand their impact on society and, more broadly, on how the idea of nature-based gender and separated spheres have evolved to what they are today.” —Towards Emancipation?

Jean-Jacques Rousseau:
Jean-Jacques Rousseau (1712–1778) was one of the leading figures of the French Enlightenment. The author of popular novels such as Emile, or On Education (1762), he achieved immortality with the publication of philosophical treatises such as The Social Contract (1762) and A Discourse on Inequality (1754). His ideas would serve as the bedrock for leaders of both the American and French Revolutions.